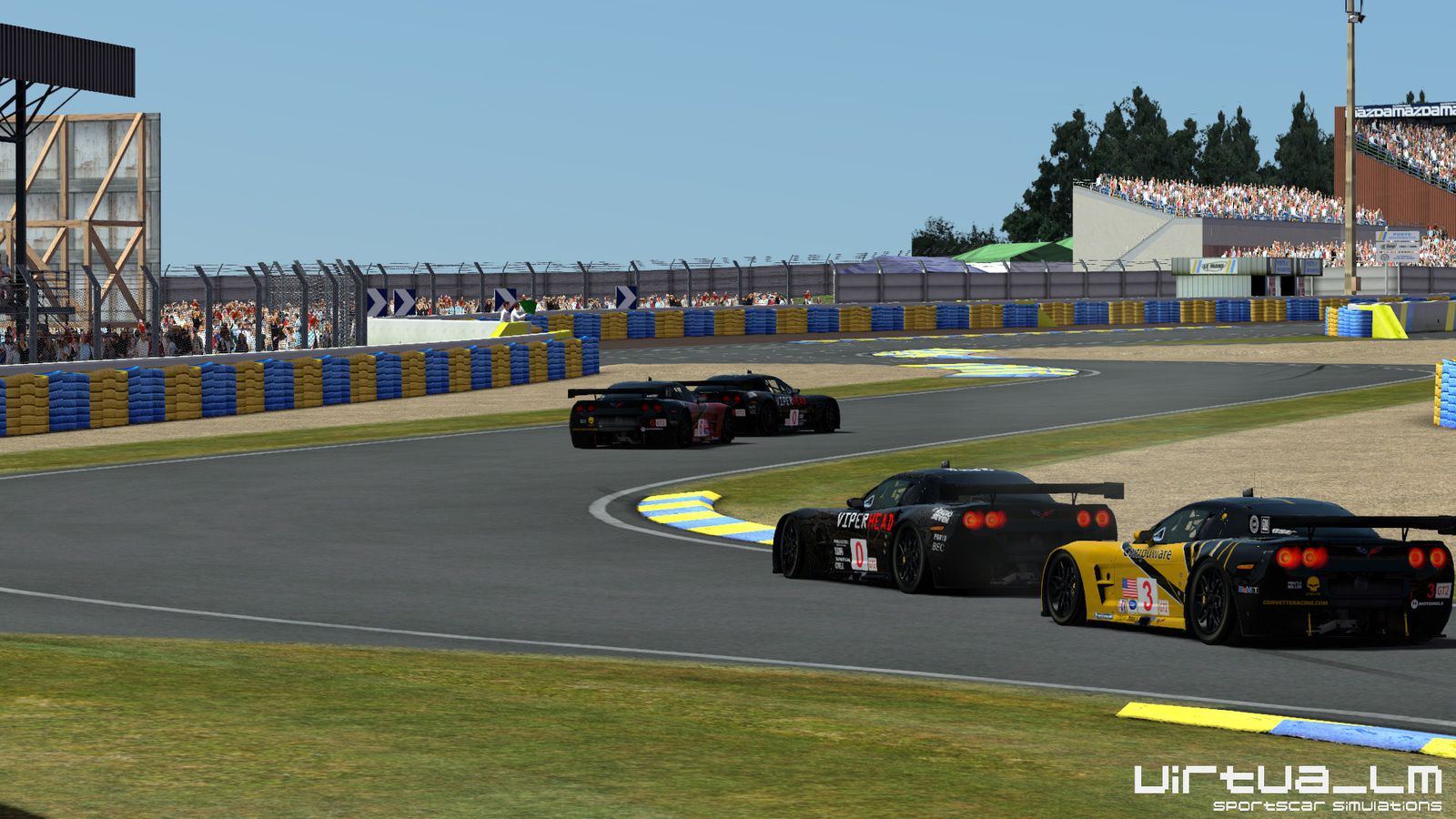 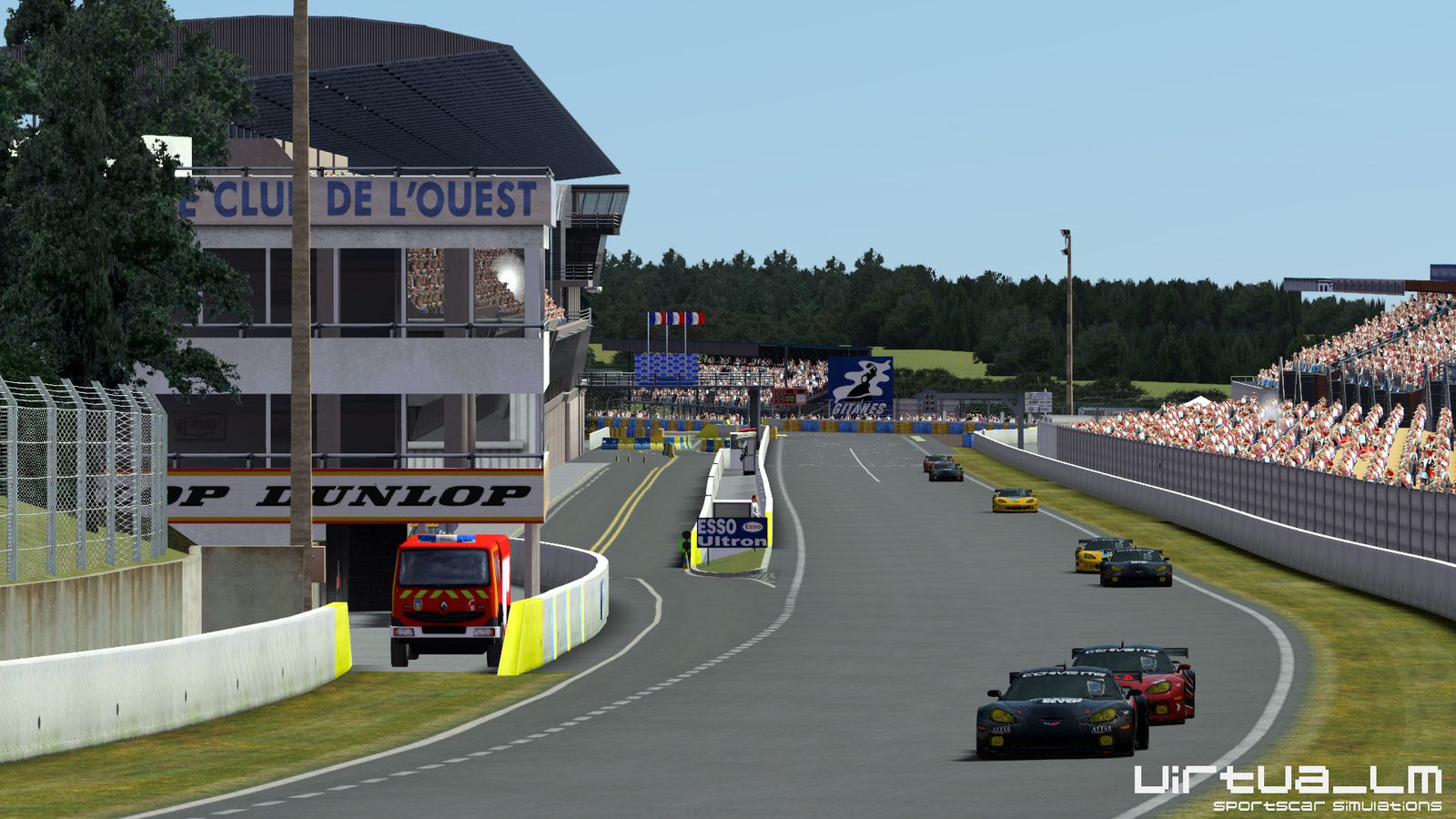 Basic info:
- This is a greatly improved version of the previous release. The most refined area is the guardrails and the specularity levels of the objects. A lot more objects are reflected on the cars or during rain. AI has been refined and the AI-does-not-pit bug has been fixed. Oh and there’s also pit perches now.
- Originally the track was started for rF1 by Sylvain Glapa, who has done an incredible job with most of which you still see today. The largest ones (in my opinion) would be the trees (look out for the distinct types in the right areas), the road surface modelling and the grandstands/pit buildings. The shaders and some textures have evolved but without his basis we would not have such a track today, let alone one this great.
- The shoulders down the Hunaudières straight are not for driving. We could not find any hard info but racing cars generally do not use it outside cases of emergency. We implemented this by making them uncomfortably bumpy.
- If you find something that should not be please leave a kind note. Few things are worse than you having a point that we don’t read because it was presented in an unkind manner.

Incomplete Changelog for v1.00
- fuel consumption recalculated, didn’t notice any mods being impacted by this but better safe than sorry.
- increased LOD bias for some textures which increases resolution at a distance, lessening unintentional “haze” effects, if that’s what you guys meant
- a lot more objects will now reflect on the cars, most noticably on cars with high reflection settings and dark paint schemes. This does cost a fair amount of performance so make sure to test the track with your favourite mod and desired number of cars again. There are three settings for reflections now, No (meaning a static cube map), Low and High
- trackside cameras have optimized shadow ranges to lessen the issue of car shadows disappearing too soon
- sunblock meshes have been added, one to fix sunlight showing through gaps, one to avoid having objects lighted once the sun moves below the horizon
- reworked a handful textures, increasing texture size minimally where helpful. Also optimized the mip map bias to sharpen textures which are already large enough.
- guardrails have had extensive work done on them. Gaps have been protected by rebuilding the guardrails. Variety maps have been added in two distinct varieties.
- made shadows beneath tirewalls transparent instead of opaque black
- fixed intermittent specularity issue on helicopters
- worked on specularity, especially of the road and the guardrail. For some reason they had practically no specularity in v0.90.
- re-assigned pit spots, now including 23 pit spots instead of the previous 18. Maximum number of cars is still 46.
- eliminated any flashing in the specular effects I could find

Performance guide:
- Use the Track Detail and Shadow Detail settings! Both are implemented intensively for you to fine-tune performance. Max/Full settings are beyond what my machine can easily manage. Don’t be afraid to use High or even Medium settings, it will still look good.
- If you only have 1GB of Video RAM you might struggle due to the size of the track. Single Player should be fine even at high/full settings, but as soon as you load more than one or two AI cars you will probably see slow-downs. I’d suggest to go down to Track Detail: High and Shadow Detail: Medium as a first step and see if that frees up enough Video RAM for you. Track Detail: Medium and a lower Texture Detail setting would be the next steps.

Known Issues:
- There is some flickering and clipping present due to the size of the track. We tried to minimize the flickering, especially with the spectators on the grandstands when looking straight at them from your garage, but could not completely eliminate it. This is more pronounced in some cars (depending on how far away the near clipping plane is as far as we can tell) rather than others.
- We had a single case of the pace car not deploying for a rolling start online but could not replicate it offline where it worked just as it should. If you encounter this please let us know.
- The 370z is prone to rolling over when cutting the second curb (the one on the right) of the Ford chicanes, presumably due to the underside hitting the edge at a bad angle or the suspension travel being too short. We, much like the FIA probably would, advise not to cut the curb. If you notice this kind of behaviour with other cars as well, let us know.
- On some systems the Zeppelin is showing through the trees. This is an issue with rF2 that should be fixed with the next build.